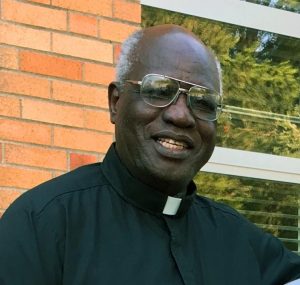 “I make common cause with every one of you

and the happiest of my days

will be when I shall be able

to give my life for you”

On July 31, 1943, Modi Abel Nyorko, was born in Terekeka to Elizabeth Kaku Jube and Nyorko Jangara of Yoyom large family of Moridi village, Mundari by tribe (Central Equatoria, Republic of South Sudan). He attended catechumenate in his home village church and was baptized at Kadule missionary center in 1951.

He attended his Elementary at Kadule from 1951 to 1955; Intermediate in Okaru seminary 1956; Seminary in Tore River Major Seminary (Yei) 1962; and after short time of Philosophy and Theology in Kit and Lacor (Uganda) he joined the Comboni Missionaries in Italy in 1968.

His Religious Formation made him attend the Novitiate in Florence (Italy) from 1968-1970. He made his First Religious Vows on September 9, 1970. He attended Pontifical Urban College, Rome (1970-1971). He was ordained a Priest on April 3, 1971 in Macerata by Bishop Ersilio Tonini, later Cardinal Tonini. His Final Religious Profession was September 27, 1976.

Fr Modi was assigned to work in South Sudan at the end of 1971. By then South Sudan was attached to the region of Khartoum under Fr. Ottorino Sina as Regional superior. Since the expulsion of the Comboni missionary in 1964 only the Comboni radical members worked in South Sudan. Nzara was re-opened on the 6th December, 1971 with Fr. Urasi as the superior of the community. Fr. Modi Abel joined them in April as Associate pastor among the members of the community. From 1977-1980 he was Pastor of the same Parish. Since education was one of their main priorities, in 1973 he founded Comboni Primary School and acted as first director. The plan was to have the full programme of education with Junior secondary and the senior secondary school. The Junior level was added in 1990 by another Comboni missionary, Fr Elvio Cellana. The primary school still runs till today.

From 1980 -1985, Fr Modi was in the North American Province. During this period, he did a Master in Educational at Xavier University in Cincinnati, OH. Later he studied Christology at Catholic Theological Union. He was called back to Juba by Archbishop Paolino Lukudu.

He became the Vice Rector of St Paul National Major Seminary in Bussere (Wau) and continued in Munuki, (Juba) from 1985-1989. Some of his students in St Paul’s Seminary include some Bishops: the current Archbishop of Juba, His Grace Stephen Ameyu Martin Mulla; the archbishop of Khartoum, His Grace Michael Didi; the Bishop of Tombura Yambio, Bp Edward Hiiboro Kusala; Bishop Trille Tombe, the current Bishop of El Obeid. While serving as Vice Rector, Fr Modi was also appointed Archdiocesan Director of Youth Association 1987-1989. As he was Vice-Rector he was also elected as Vice-Provincial to Fr. Cesare Mazzolari who was the Provincial Superior from 1987 to 1989.

In 1989 he was elected Provincial Superior of South Sudan province and took office on 1st January, 1990. This made him to be the First African Comboni Missionary Provincial the Institute ever had in its history. When receiving the Province from Fr (later Bishop) Caesar Mazzolari, it coincided with the time the war in Sudan had intensified. As he took the new office of the provincial, it coincided with the visit of the general Councilor Bro. Giuseppe Menegotto who visited the province from 31st December, 1989 to 27th January 1990. He could not visit the outside missions due to the fact that flights to Nzara and Wau were often cancelled. He then visited only the communities within Juba and spent a couple of days at an Assembly with the confreres of Juba. Some missions were under the government control areas while others were under the SPLA/M control areas. The visits of Fr. Modi to the missions were very difficult and risky. However, he managed every now and then to pay a visit to those in the government areas; whereby to meet the confreres in the SPLA/M control areas was impossible. All these affected also the assignment of personnel to the province. Even the confreres from the different missions such as Nzara, Rumbek, Raja and Wau find it difficult to come to Juba as they were confined in their missions. The SPLA/M intensified the shelling of Juba, and consequently some confreres wanted to leave Juba. Fr. Modi convened a meeting and left each confrere to decide whether to stay or leave. After the meeting some left Juba and seven confreres including Fr. Modi as provincial remained. Other confreres went either in Nairobi, Cairo or Italy. With such situation instead of looking forward for the implementation of the evangelization programmes and improving of the services in the province towards the people and the confreres, in his time, he experienced long periods of stagnation in the missionary activities due to the escalation of war. Due to this pressing situation, the postulancy was moved to Khartoum since St. Paul Major seminary was transferred there as well. Some confreres had to move out of their missions due to high degree of risk and insecurity in the missions and South Sudan in general.

On the 1st July, 1990 a New Group of Comboni missionary was set up by the superior general Fr. Francesco Pierli to serve the people in the so-called liberated areas to ensure a degree of stability. Fr. Modi was there during the discernment. Fr. Eugenio Caligari as the Coordinator had to report directly to the General Councilor for Africa, Fr. Venanzio Milani. This was another challenge Fr. Modi, as a provincial, had to accept.

In spite of all these hardships, Fr. Modi participated in the General Chapter of 1991. This happened when the towns of Juba, Wau, Raja and Rumbek were firmly besieged and locked in by the SPLA. Here the Provincial Superior, his Councilors and the confreres present were able to evaluate the concrete situation from various perspectives: Situation of the province, Education in the country, the policy of the government, the work of the opposition, the financial crisis, health situation, Pastoral work in the dioceses of Juba, Wau and Tombura-Yambio.

When things became worse, the government of Khartoum decided in 1992 to expel all the expatriates from Juba. That included all religious and foreign staff member of NGOs. Fr. Modi was still in Khartoum. Thus, all foreign Comboni missionaries in Juba had to leave South Sudan. Since there was no contact with the Comboni missionaries working in the liberated areas, Fr. Modi (in the provincial House) was practically left with only Fr. Albino Adot (responsible of pastoral care of St. Kizito). Meanwhile by the end of 1992 the expatriate missionaries were only in Wau and Raja. The Postulancy was moved to Khartoum, Fr. Todd Riebe carried on as Formator of the postulancy for some months before leaving for USA.

The New Superior General, Fr. David Glenday and his Councilors accepted the proposal of the New Sudan Group to remain one and consolidated it with Fr. Chemello as new coordinator. Meanwhile Fr. Modi, whose term of office was expiring on the 31st December 1992 was asked to continue as Delegate of the Superior General to the confreres still belonging to South Sudan Province. And the Councilors were also to continue as Councilors with Tod Riebe as Vice-Superior. Hence, the Province of South Sudan was dissolved.

In the last years before leaving for Sabbatical year to Rome together with other confreres Fr. Modi worked among the displaced especially Mundari, Madi and Acholi people in the camps of Juba. After this he was then asked to move to Khartoum where he stay for two years. Then from September 1996, he went to Rome for a sabbatical. And from July 1997, Fr Modi has been a member of the Comboni Missionaries North American Province till the time he finished his race here on earth on the 1st June, 2020.

As a provincial his period was the most difficult one in the Circumscription because of the conflict that engulfed all South Sudan and affected also the life of Juba. South Sudan was also among the most difficult circumscriptions at that time. Hence, Fr. Modi had both the honor and the arduous task of taking up his term of office when everything in South Sudan seems to be crumbling under the weight of the events. He was practically besieged in Juba. He expressed with great joy that the confreres were able to do their ministry inside juba effectively till 1992. He could only visit the communities of Wau and Raja either from Juba or Khartoum. There was a possibility of chartering a plane except the danger it entails. As their presence in the mission he did not see any difference with the local clergy; their fate was the same as theirs. He also expressed that he was happy with the confreres. They respected him and cooperated with him as their provincial. He allowed those confreres who wanted to leave Juba during the shelling to go. He recognized that his years as a provincial were very difficult but the confreres accepted all sufferings willingly without complaining, even cheerfully. He said that they knew it was a challenge to their ministry and mission. He said that the presence of the confreres in the insecure areas was an encouragement to the clergy and the Christians in general. He said, when he was in Busere, when the war started in the area the other expatriates left but he and other Comboni missionaries remained.

Fr. Modi is known by his seminarians as a kind, patient, friendly and good formator and ever smiling priest. They recognized him as shepherd, formator and father to all. He lived his missionary life with zeal and dedication.

Cause of his death: Fr. Modi was already having some underlines health issues when the COVID 19 took the advantage and hasten his death on the 1st June, 2020 at 10:30 am USA local time. His body will be laid to rest in St. Joseph Cemetery in Monroe Wednesday 10th June 2020 at 11 am.

Fr. Modi consecrated his life totally for the mission and he remained faithful to his consecration till he died in the mission of North America. May God bring forth more vocations through his life witness. Our beloved Fr. Modi Abel Nyorko RIP.

Finally, we the family, the Archdiocese of Juba and the Comboni missionaries of South Sudan province would like to thank the North America Province and all those who in one way or another have cared for Fr. Modi during his illness. May God bless you all.