1 — Geographical and ethnographic notes
a – The land
The mission of Kajo-keji (Lomin) is situated at the heart of the Kuku land and comprises the whole of the Kajo-keji county, so called after the name of the tribe’s Chief (Kajok-Köji) who was in power during the British rule in the Sudan. The land is situated in the southernmost part of the Southern Sudan near the Uganda border district of Moyo. It has an area of almost 112,600 km2 with 5 administrative local areas known as payams: Kangapo 1, Kangapo 2, Lire, Liwolo, Nyepo and kala 1.
b – The people
The Kuku are a people of Southern Sudan. They belong to the Nilo-Hamitic tribes of the Bari speaking group. They are chiefly a farming people relying on mixed farming though few keep domestic animal like cows, goats and sheep. They are famous for their mango trees which they tend with great care. During the rainy season they grow substantial food crops, mainly sorghum, maize, millet, cassava, ground-nuts, sweet potatoes and beans. In the dry season they manage a small scale of cattle, goats and sheep keeping. The Kuku number about 250,000 and a few of them are found in West Nile district of Uganda.

2 – Historical notes
a – From the beginning to 1982
During the British rule, Southern Sudan was divided into zones entrusted to the different Christian denominations. The area of Kajokeji was to be evangelized by the protestant, so Catholic missionaries were not allowed to go and work in that area. In the early ’40s a group of Missionaries of Africa (White Fathers) went to Kajokeji, but fail to get permission to establish a catholic presence in the area. Kuku people who went abroad (mainly Uganda) came into contact with the catholic missions and many became Catholics. In 1954 a group of these invited Fr. Tarcisio Lodu, a diocesan priest, to pay them a visit. He arrived in Mondikolok and there he established the first catholic chapel among the Kuku. He baptised Lazarus Laji and James, who later became catechists in the area. The chapel of Mondikolok was under the parish of Yei. Later, other chapels were established (Kimu, Lomin, ecc) with resident catechists.
b – From 1983 to 1987
In 1983, Fr. Pio Ciampa, SJ, was sent by JRS to the area of Kajokeji to look after the Ugandan refugees. He settled in Lomin and took care of the Ugandans and Sudanese alike. In 1984 Fr. Mario Busellato arrived in Kajokeji and went to live with Fr. Ciampa in Lomin. In the meantime he started developing the chapel of Kimu and built there the first catholic church in permanent material among the Kuku.
In 1986, Fr. Ezio Bettini, Fr. Ignacio Lopez Toro and bro. Domenico Cariolato were sent to join Fr. Busellato and to form the Comboni Community of Kajo-keji (Lomin). Intense pastoral and development work was carried out. Fr. Ciampa went to Tore and the service to the Ugandan refugees was taken over by the Comboni community. Later on the Comboni Sisters arrived in Lomin. By 1986 it was clear that the place to be developed was Lomin and not Kimu, because the land in Lomin was much wider and suitable for further future development of the mission.
In august 1987 the mission was abandoned because of the insecurity caused by SPLA soldiers fighting the regular Sudan army. The missionaries went to Moyo (U) and the mission was immediately looted by the government soldiers.
c – From 1999 to 2011
In 1999, Fr. Busellato returned to Lomin and started parish activities. The following year the Kajo-keji (Lomin) community was re-established and the project of a secondary school started to take shape with the commitment of Fr. Eugenio Magni. In 2002 the Comboni sisters returned to Lomin.
To Fr. Mario other Comboni priests succeeded as parish priests of Lomin: Fr. Tarcisio Loro, Fr. Paul Idra, Fr. Josè Manuel Garcia, Fr. Jesus Aranda and Fr. Albino Adot. Other missionaries worked or are working in Lomin: Bro. Mario Rossignoli, Bro Ottorino Gelmini, Bro. Erich Fishnaller, Fr. Giampaolo Mortaro, Fr. Giovanni Ferrazin, Fr. Mattia Bizzarro, Fr. Jimmy Aventore Milla, Fr. Luis Okot and Fr. Ezio Bettini.

3 – The Comboni community of Kajo-keji (Lomin)
a – From 2000 to 2004
The community of Kajo-keji (Lomin) was started in the year 2000, during the war between North and South Sudan. Because of the war situation, the community was involved more in alleviating the hardships of people and in providing the basic services that were not available, like education and health. As there were only few people living in the area, not much was done in the field of pastoral care, training of leaders and social development.
b – From 2005 to 2011
With the Comprehensive Peace Agreement (CPA) signed in 2005, the Sudanese began returning to their homeland. UN agencies, NGOs and various Christian denominations have provided the returnees with basic tools, shelter, health and educational facilities. After five years, most of the Kuku people have returned home, settled in their places of origin and begun working (farming) to cater for their needs.
The community of Kajo-keji (Lomin) has contributed to the welfare of the returnees through financial support to school children, academic education, formation of church leaders, vocational training in the workshop, building of schools and dispensaries, etc.
In 2007 the Comboni Community of Moyo was closed and the confreres joined the community of Kajo-keji (Lomin). 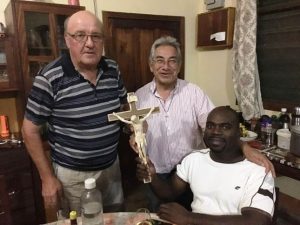 6 – Activities of the community
a – The Parish
The Parish of Kajo-keji (Lomin) is dedicated to the Sacred Heart of Jesus and was established in 1985. It includes all the territory of Kajo-keji county and the Kuku People. The languages spoken are Bari and English.
It is difficult to estimate the number of the Catholics in the parish, because many were baptized while in Uganda, but roughly we could speak of 15.000 Catholics.
The parish has 37 chapels and 34 catechists. In the parish cemetery which is located in Lomin, three Comboni Missionaries are buried there: Fr. John Ferracin, Fr. Mattia Bizarro and Fr. Magni Eugene.
In some chapels there are kindergartens supported and sponsored by the Parish.
b – The schools

c – The workshop
The purpose of the workshop is twofold: it trains people in different jobs such as carpentry, ironmongery, mechanics, masonry, weaving and bakery, fruits farm and poultry, and produces good quality furniture for school.

LETTERS FROM THE MISSION IN SOUTH SUDAN: ‘A NEW EXPERIENCE’

The Community of Lomin is in a particular situation due to the conditions and social context of Kajo-Keji. The members of the community left Lomin and currently stay in Moyo, Uganda.