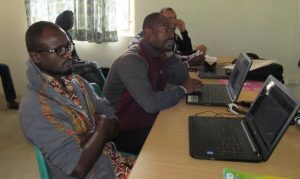 “The joy of the Lord is your strength” (Nehemiah 8:10). These are the words that occupied my mind the very moment my formators hinted that I might go to South Sudan for mission experience. Sudan!!!! I kept repeating to myself while my mind rushed to and fro; dumbfounded. Certainly, at that point it never dawn to me that, South Sudan would spring up. With a shallow smile that hid any sign of surprise, I said to them “I have no problem with that”.  And so began the interior journey to the land with a rich heritage of Comboni spirituality. A place where Comboni himself was shaped into the Saint we have now. Additionally, the fact that, it is easy to say the service I can offer than choosing a specific geographical mission, gave me enough space to re-adjust to the new mission and that led into a joyous anxiety to be in South Sudan.

On the 29th of May, I and two other confreres (Bernard Sossougah and Albeer Mina) touched down at Juba International Airport. It was a fine bright day coated with a relatively strong heat coming from the ground as if in protest to the insufficient rain that had just fallen. While at the immigration office, I was greeted by a fine looking gentleman who immediately identified himself as a former student of Comboni College-Khartoum upon realising that I am a Comboni Missionary. Thus began my mission experience in South Sudan. Despite all that I have heard in the media and from people who have been in South Sudan; war and porous security, I had a sincere sense of peace and feeling at home from my first step on South Sudanese’s soil. I believe this was a rare grace God gave me and it is this same grace that he wants me to share with my brothers and sisters in South Sudan. For it is his joy that we live in peace and feel at home with one another.

In Juba at the Provincial House, I had a great experience with the confreres. As I was waiting for my destination, I had an opportunity to visit the Good Shepherd Centre in Kit, the Pre-Postulancy house in Moroyok, and the UN Camp where thousands of South Sudanese are staying after having been displaced from their houses due to war. The experience at the camp gave me a personal glimpse with regard to how inhuman some of our actions can be. It was an experience of shock, anger/helplessness ending in a prayer of supplication. It was heavy for me to imagine how one is a stranger in his/her home country. I remember leaving the Independence celebration at Wau Stadium on 09-July-2019- State of Wau. I felt it was a mockery to those in camps. I acknowledge the economic, political and other forms of oppression that the South Sudanese might have endured at the hand of North Sudan. I however, don’t see it viable to celebrate while a fellow child of the soil is desolate.

Moving to the Diocese of Wau for my mission experience was another great opportunity of growth and authentic contact with the real situation of the mission. My experience seems to suggest that Wau has beautiful people, welcoming, social, and friendly. This gave me a sense of belonging to a larger community even when a handful of soldiers insulted me after blocking them with the Car.  My mission in Wau was basically in three places; Parish, Prison and the Secondary School. At the parish, I was serving the parish youth choir, lay lectors, Comboni Vocation Group and the youths. At the Prison, I was teaching primary 2 English to some inmates. I was also teaching the senior 2, 3 and 4, Value Education at Loyola Secondary School. These gracious opportunities opened the way for me to the world of young people. It exposes me to their joys, wishes, dreams of a better South Sudan and their fears, pain and stress. Listening to their dreams in the midst of uncertainty, especially the students, gave me joy and hope and encouraged me to put in more in what I was doing. It is normally said that, the youth are a sign of hope for the future, I think for the youth in Wau and South Sudan in general, they are more than just a sign of hope. They are a sign of resistance against evil. They are a sign of surety from God that, it is possible to restart things, for it is never over until God says so. It is in this that from the missiological point of view, the methodology of Pope Francis finds great significance. That while taking advantage of the global trends, we may propagate a missiology of attraction; a church that attracts, message that attracts and a method that attracts.

Teaching English to inmates at Wau Central Prison was also a sign from God that rebuilding South Sudan socially and spiritual is a stone throw away. Some of them, spoke Arabic and had a strong Arabic ascent. However, the zeal they shown, some were even above 60 years old, yet the desire to go beyond the ordinary was awesome. I strongly belief the same zeal can gradually be used to reconcile a society at war with itself.

Towards the end of my mission experience it was becoming a struggle to accept that the time I was given is running out. Just a thought of it was a bitter pill for me. I did not want to leave South Sudan. I had become one with the community of Wau, they were my friends and so was I to them. The impact Wau and South Sudan at large, made in my spiritual and human growth is quite deep and will for ever be a point of reference for me. I believe God took me to South Sudan to teach me how to perceive a possibility among a billion impossibilities.