Consecration of New Bishop in Malakal 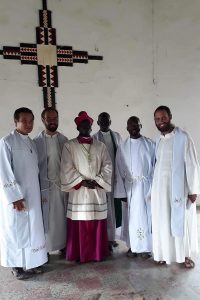 On Sunday 28 July 2019, nearly thirty thousand people filled the playground of Christ the King Parish (Malakal) to attend the consecration of Fr Stephen Nyodho Ador as the new Bishop of Malakal diocese.

His appointment follows a ten-year apostolic administration lead by Msrg. Roko Taban marked also by the conflict that started on December 2013 and the consequent terrible destruction. The city of Malakal appears as a ghost town now. All the vast territory of the diocese experienced much devastation. Church premises were not spared from looting. People have been very much divided on tribal lines. Frustration is quite high.

Therefore, the consecration of Fr. Stephen Nyodho ushers in a new era of hope and reconciliation for the inhabitants of this vast area. “I am the Bishop of five million people” he said, “I am not only the Bishop of the Catholics but of all people: Christian and non-Christian. When I do speak, I am the voice of all the suffering people of Greater Upper Nile Region. Let us join our hands and give peace to this land”.

Many people who came to attend the celebration came from the nearby Protection of Civilian camp set by the UN who hosts about 30.000 displaced people. Many other came from very far places and had never had the chance to travel to Malakal during the last year of conflict. People were moved to see Malakal in a so bad condition. “It is mind-blowing to be here today with my sisters and brothers in peace, especially considering the violence that had taken place during the last few years” said a pilgrim.

A group of ten catechists from Akobo led by Fr Jacob Nhial arrived to Malakal after twelve days’ journey on foot passing through plains and swamps. A group of one hundred faithful travelling by boat from Old Fangak with their missionaries, Fr Alfred Mawadri and Fr Gregor Schmidt, were singing church songs while approaching a check point of government soldiers before reaching Malakal. They were trustful but did not hide some trepidation. They were surprised to witness the soldiers making a collection to help them in the journey. A catechist called Gatkek also rejoiced to find there his sister who he believed was dead because there was no news of her since the conflict started six years earlier.

“This country is ours and it is an obligation for all of us to take part in bringing about unity, reconciliation, and forgiveness among ourselves. This is a day for relationship restoration for the sake of generations to come,” Cardinal Gabriel Zubeir stressed. Bishop Daniel Adwok added: “The town is down. Someone might think to come and rebuild the city according to his old splendour. However, I tell you, before building houses and palaces, we must first build new relationships”.

South Sudan’s vice president Wani Igga was also present and emphasized the importance of community re-building. He offered words of encouragement for a more resilient future: “Seeing you gathered in such large numbers today is a sign of peace, and I urge all of you to come back to your homes in Malakal and beyond for the sake of building our lives once more in the great resource-rich Upper Nile region,” he said. We hope that politicians and leaders may look at the population as the greatest resource of this region.