A story of Love to the mission with St Daniel Comboni 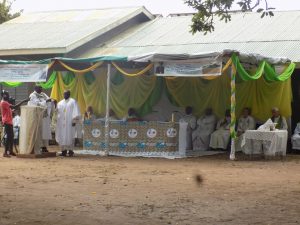 From a well to a dignified Catholic mission

Comboni Day (10/10) 2018 was a very special one in mapuordit because the community celebrated the 25th anniversary of the catholic presence. Saint Josephine Bakhita Parish was established in 1993. Before then, there was practically nothing if not a well to fetch water. Today, the mission counts three Comboni – nursery, primary and secondary schools and a 113-bed mission Hospital. The celebration was educative, informative and spiritual as it cemented strong spiritual and social relationship among the Christians of mapuordit and those from all the neighboring parishes.

The entire feast evolved around the theme: “We belong together” inspired by Ephesians 4:25 – 5:02. This intended to unite all the Christians in the parish and its surroundings who often experience recurrent divisions among themselves in order to give them the feeling of belonging to a parish, a diocese, a nation, and finally to the whole Catholic and Universal Church.

11 priests, 3 sisters and about 1000 youth from Mapuordit parish and a team of 45 representatives from three parishes attended the event. Others guests were the representatives of the former students of Comboni primary school, of various sector in the Diocese of Rumbek namely Education, and other Christian denominations (ECS), the local authority representatives, the church leaders, men, women and children.

A special attention was given to the youth from within and outside the parish who actually are 97 percent of the Catholics in the parish and the entire Diocese of Rumbek (DOR). With them, the celebration began on the weekend of October 12-13 with the aim to provide faith formation and spiritual accompaniment in line with the Synod on youth held in Rome this year.

After the official opening of the celebration organized by the Oratorio youth group of the parish, Mr. James Taban, the guest of Honor and representative of the governor of Eastern Lake states, invited the youth to take advantage of their being youth in the church since the Catholic Church offers the best opportunity for human and spiritual growth. He called on everyone to follow his example as a former catechist and choir master in the church when he was a student twenty five years ago. He helped the parish priest fr. Joseph pellerino to translate hymnal books and the Bible in Dinka language.

The first speaker of the first day was Fr. Boniface Cssp, parish priest of Ton-Aduel. In his expose, he insisted on the values of peace and reconciliation in families today. Later, Fr. Stefano mccj invited the youth to make a journey of conversion following the footsteps of some icons in the church today, namely Saint Augustine of Hippo, influenced by her beloved mother Monica. Although the afternoon was tainted with heavy rain, this did not prevent youth to continue with the celebration. Late in the day, there was adoration, followed by singing competitions, Football, Volleyball, modeling, music and traditional dancing which were appreciated and fully participated into by all youth.

The next day, after morning mass presided by Fr. Giovani Girardi mccj and animated by the Youth from Holy cross Yirol, all the youth had access to the sacrament of reconciliation. Fr. Joseph Pellerino mccj and Seminarian John Mayor animated the introduction to it.

More talks were registered on the same day. Fr. John Malou, from Bunagok spoke about ‘belonging together as one family’;  Fr. John Waweru from Pacong highlighted the teachings on the sacrament of Marriage in the Catholic Church as sometimes it is opposed to the local culture where polygamy is a value.  Fr. Joseph Orina, the rector of the diocesan minor seminary spoke about vocations in the church and Dr. Enock, ended the series of talks with health care. Youth had then a tremendous open forum to ask questions to the church leaders and speakers present in the event. In the evening of the 13th, Fr. Ignacio and Fr. Placido mccj led the procession around the mission praying the rosary in thanksgiving for the maternal support and care from our mother Mary, our lady of the sacred Heart.

Among the invited guests was the Pastoral coordinator Rev Fr. John Mathiang who was the main celebrant of the solemn mass on 14th. During mass, the main celebrant’s homily focused on love of one another, the basis of true peace. Fr. Mathiang reminded the participants especially the youth to promote a great sense of belonging to one another; only in this way, there will be no issues of revenge, cattle raiding, inter-clan clashes etc. The choirs of Mapuordit and Yirol led the hymns during mass under a cool and calm environment where all believers were seated comfortably.

In his speech after mass, Minister James Taban was grateful to God for the many successful citizens who have gone through the hands of the Comboni missionaries within these 25 years. On behave of all the former students of the mission, he apologized to the priests, brothers and sisters who were physically abused and assaulted by students and indigenous. Taban gave a brief history of how, from yirol, mapuordit parish had been first established in pan-kuek, after two (2) months moved then to aguran and later on to mapuordit due to insecurity and in search of water. Mr James invited the Diocesan coordinator to gather people to write down such a beautiful history of the mission.

Fr. Mathiang thanked the parish priest, the Comboni brothers, fathers, the OLSH sisters and especially Fr. Pellerino, the mission founder for their hard work and dedication to the mission. In line with the above, the other speeches focused on gratitude to the Comboni missionaries for maintaining the candle burning in the good work of serving the community of Mapuordit, despite the challenges. In his message, the Episcopal Church of Sudan Bishop mentioned specifically the fate that happened to Rev Fr. Placide Majambo, the current parish priest, who never resigned from the call of serving God after being shot in the area.

The celebration ended quite well but with some chaotic announcements. As we were celebrating, on Saturday, two university students had been killed 45 km north of the mission, on the road between Aluakluak and Akot. Given that the situation seemed tensed, the localgovernment had to organize security forces to escort the participants from Rumbek, Yirol and Bunagok. A few minutes later in our own town, a useless quarrel broke up among local musicians. Only a few gun got in the air could ease the tension. And at this point, the celebration almost went viral since no one had a clear picture of what was happening! Anyway, to those acquainted with Mapuordit area, it is certainly no ‘big news’ because it is common. Lack of Peace is our ‘daily bread’ and this proves how the journey to full Christian maturity is vital. All in all, Twenty five years are simply similar to a drop of water in the ocean. Evangelization is still needed in mapuordit and its surroundings. We thank God because everyone who attended the event reached home safely. In Mapuordit, dancing continued up to six in the morning. 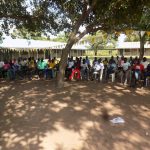 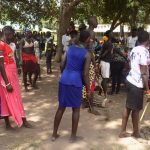 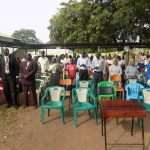 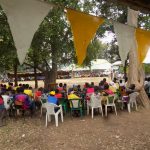 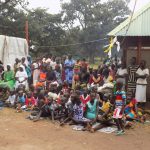 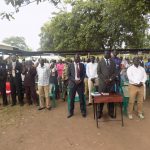 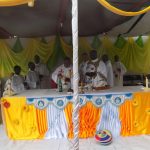 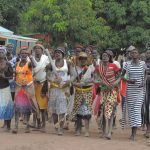