A new deacon for the Church in Nuer land 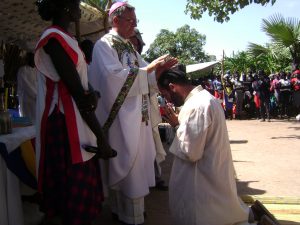 After a long period of preparation – both for the candidate and the Nyal Catholic Community – finally, Mario Pellegrino, a Comboni Missionary from Sicily, Italy, received the order of the diaconate by the imposition of the hands of His Lordship, the Rt. Rev. Bishop of Moroto, Damiano Giulio Guzzetti, on the 1st of May 2018. A memorable day for the Parish of Saint Joseph, the worker, whose members celebrated with all the solemnity and joy of this Eastertide, in the town of Nyal, in the Western Upper Nile region. 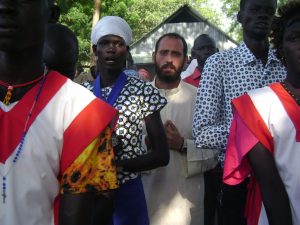 Deacon Mario enters among the joyful hymns of the faithful

Bishop Damiano arrived in Nyal five days before and was accompanied by the Provincial Superior of the Comboni Missionaries in South Sudan, Fr. Louis Okot Ochermoi and two other missionaries of the same institute whom joined in the festivities. Their trip took them by plane from Juba to Rumbek and from there they had an airlift by the WFP – UN emergency helicopter service to Nyal.

As soon as they had come down from the aircraft a rare out of season rain had befallen upon them all, and everyone rushed back to the mission compound, amidst the banging of drums, marching hymns chanting, and an explosion of unfettered joy. Their improvised local umbrellas served not only to protect the bishop from the sunrays but also from the persistent rainfall. But even though all the cheerful crowd were soaked, all the rest of the area was dry and sunny. This was immediately interpreted as sign of God’s presence and as a shower of blessings for the joyful occasion.

One of the highlights of the celebrations were the marching groups of choir singers whom accompanied the bishop and his companions in his visit to the chapel of Doung, on Sunday 29 of April. That is a feature of the nuer faith and the preferred welcoming expression for the local youth. In fact, throughout their stay new groups of marching crowds kept on arriving at odd times from neighbouring chapels. And according to the local protocol, each group had to be welcomed under the shade of the largest tree in front of the Parish Church, for a thanksgiving prayer. Then, they were given a word of encouragement, greetings from the parish authorities and directions for their accommodation. This rhythm was kept on until the day of the ordination and the old airstrip was used as a parade mall by all those who came. 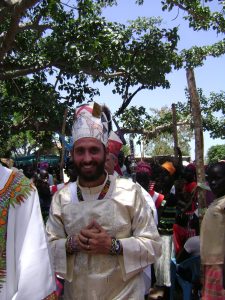 The liturgical procession at the end of the mass

Apart from the solemn entrance, the rite of ordination and the ever-present African dancing, nuer people made a real difference with their full participation. Four-hour-mass was just enough for the community to show all their love and care to Mario Pellegrino. The longest moments were taken up by the cues of people during the three collections and the offering of gifts and greetings to the newly ordained.

On their going back to Juba, the visitors stopped at Rumbek airstrip for a couple of hours and took advantage to pay their respects to late Bishop Mazzolari. They went to visit his mortal remains which repose inside of the Holy Family Cathedral. Bishop Caesar Mazzolari was a great support for the local community during the years of the war. And especially for his pastoral care, and concern for the welfare of the South Sudanese, withdrawing the attention of the Catholics and the international community towards them.