“Forget past, go in for reconciliation” 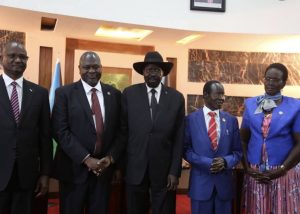 “Forget your differences and seek real peace,” Msgr. Stephen Ameyu said. He congratulated the government for the major steps taken towards peace and the return to the 10 States as it were before the beginning of the present conflict. He said that there is hope for peace in South Sudan. In fact, opposition leader Riek Machar has recently re-entered the presidential office. On February 22, Riek and three other vice presidents were sworn in at a ceremony in Juba; an event marked by calls for reconciliation and sustainable peace.

“We must forgive one another and reconcile,” president Salva Kiir said. “I want to reiterate here that I have forgiven my brother Riek Machar. I also ask for his forgiveness and I also forgive all those who still are holding out on this peace agreement. I am calling on all the peoples of South Sudan to forgive one another. I know forgiveness is painful and difficult, but it is one that we cannot do without as a nation.”

President Salva Kiir continued: “We appreciate the Holy Father for his prayers and for his call for peace in South Sudan”. By recalling what Pope Francis did in Rome when he kissed their feet, he remarked: “we have evidently listened to him and we are proud to report to him that we have also reconciled”.

The Catholic Church has played an important role in the efforts for peace in South Sudan. Throughout decades of instability, the Church has been presented in all corners of South Sudan calling people to come together to seek reconciliation. The Church also enabled local leaders to provide aid, lobby the international community, and foster peace between torn communities.