On Saturday 24th of August, about one thousand youth and children gathered at our Comboni community of Moroyok to celebrate the 54thanniversary of the martyrdom of Fr Barnaba Deng.

Fr Louis Okot, provincial superior, celebrated the Holy Eucharist and stressed the theme of discipleship underlining the word given by Jesus to the two young men that wished to be his disciples: “Come and see” (Jn 1:45-51). Fr Christian Carlassare also said that the mission of Fr Barnaba Deng remained unaccomplished as he died as a young priest of 29 for the service of the Gospel. This fact challenges us and mostly young South Sudanese to take the baton from him, join in the work of the Church and spread the Gospel: “The harvest is plentiful but the labourers are few” (Mt 9:37). Fr Paul Idra and Sr Lily Akumu presented their programme for vocation promotion.

After sharing a simple meal, several groups of youth offered songs and dances, plays and games as an entertainment. Among these groups were the orphans of St Claire House, the youth of Confident Children out of Conflict (CCC), the YCS students of Comboni Secondary School, a delegation from the nearby Protection of Civilian (PoC) UN camp, the youth of several chapels such as St Daniel Comboni, St Anthony, St Josephine Bakhita and Moroyok as well. 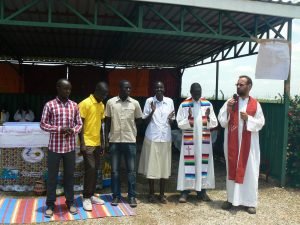 During the meeting we also listened at the moving witness of John Kacha who has just been released from the central prison of Juba after spending eight years waiting for the court case. Accusations were dropped and he was recognised innocent at last. While in prison he was an active member of the Christian community and proclaimed his faith in God. He will soon travel to Yirol to join his family and relatives once again.