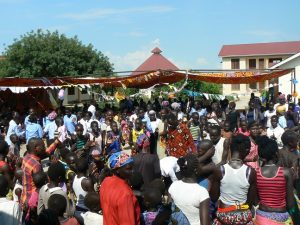 It is now the forth occasion in which the Comboni Missionaries celebrate this anniversary at the Pre-Postulancy of Moroyok (Juba) since its inauguration back on the year 2015. The community of the religious composed by Fr. Christian Carlassare, Fr Emmanuel Denima, Fr Joseph Ukelo, Fr Salvatore Pacifico and Bro Giuseppe Manara and the nine pre-postulants that are attending their orientation course invited the Christians of Moroyok, Khor Ramla, Khor Mundari and Jondoro, and friends from parishes, chapels and institutions where the religious and the pre-postulants do their pastoral work. On Saturday 18, 2018, more than a thousand people flocked to the Pre-Postulancy for the celebration. The occasion was open with the celebration of the Holy Eucharist and the Mass for a missionary martyr. The inspirational theme was based on the words of Jesus: “If the grain of wheat dies, it bears much fruit” (Jn 12:24). Prayer was followed by a simple meal prepared by a group of women of Jondoro and the entertainment with the contribution of several groups of youth that attended the event.

A SHORT BIOGRAPHY OF FR BARNABA DENG: LORD, SAVE MY PEOPLE 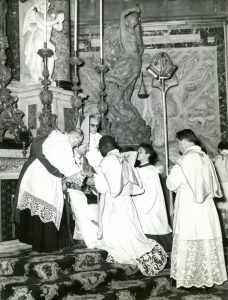 Barnaba Deng was born in 1935 in Atokuel, a village in the area of Kwajok (Bahr-el-Ghazal, South Sudan). He was Dinka by tribe. His father had died when he was still a child, and his mother took care of the education of her children. She sent Barnaba to school in Gogrial and gave him permission to join the catechumenate and become a Christian. He was baptized and confirmed in Kwajok when he was twelve years of age. In 1949 Barnaba let it be known that he wanted to enter the seminary and become a priest. His mother was not yet a Christian (she would be baptized by him after his ordination). She told him that being a priest was for white people, but she did not oppose his plan. After the minor seminary Barnaba attended the major seminary in Lacor (Uganda) and Tore (South Sudan). It was there that he eventually decided to become a Comboni Missionary. He did his novitiate in Italy and was ordained priest by Cardinal Montini, the future Pope Paul VI, in Milan on April 7, 1962.

Fr. Barnaba had a strong character. He did not excel at school, but his conduct and hard work made him a model seminarian. Exuberant, full of life (he was 1,85m tall), he was in charge of sports in the seminary. His decision to become a priest and a Comboni Missionary had no other reason but to help his brothers and sisters. He was very much challenged by the fact that white people had left their families and their country and had come to Africa to work for the Africans. At the end of his philosophy course, the rector of the seminary in his report to the bishop wrote: “Very obedient, pure, a lover of poverty and sacrifice, charitable, open and loyal; an extraordinary worker. His great enthusiasm hides the difficulties from him”.

Due to the situation in South Sudan from where some missionaries had already been expelled, after his ordination Fr. Barnaba was sent to Wau. In November he was already there. For some time, he ministered in Deim Zubeir and Raga, but a year later, in November 1963, the Bishop sent him to Aweil, and entrusted him with the pastoral care of the three missions of Aweil District: Aweil, Nyamlel and Gordhiim. In March 1964 all foreign missionaries were expelled from South Sudan.

“From the moment that the missionaries left Sudan,” he wrote from Tonj in January 1965, “I have always been alone, without the company of anyone, in the mission of Aweil. I write from Tonj, where the Bishop has sent me for a rest, after dealing with so many vexations from the local Government regarding the mission of Aweil”. Once back in Aweil he visited all the out-stations. Life in the villages was becoming harder and harder. In June he visited Nyamlel where he found only a few Christians scared by the soldiers who were spreading terror there. He went regularly to Wau at the beginning of each month for a day of retreat together with the Church personnel. Sometimes the Bishop himself accompanied him back to Aweil. This was a great encouragement to him.

Fr. Barnaba was aware that the security people were checking on his movements. Aweil had been transformed into a military garrison and the soldiers quite often harassed the people who found themselves defenceless. The troubles for Fr. Barnaba intensified when he took the defence of a woman mistreated by the soldiers. A soldier was on the point of killing her with the accusation that she had helped the Anyanya rebels. “You cannot kill a woman who did not do any wrong”, intervened Fr. Barnaba. “Mind your business” said the soldier. “I am a priest and she is a Christian. She didn’t do anything wrong”, retorted the Father. From that day he knew that the security was looking for an opportunity to eliminate him.

The tragedy was finally consummated on the afternoon of Monday, August 23, 1965. The last two weeks had been particularly bad. On Sunday August 8, Fr. Barnaba celebrated the two Masses in the parish church of Aweil. After the second Mass he went to the police to get a traveling permit for Wau. He was told to wait three days. He had just reached home when a friend came and told him that his life was in danger and advised him to hide.  At 6.30 pm, another person rushed to inform him that the soldiers were coming to arrest him at the mission. The father hid himself in the grass. Half an hour later the soldiers broke into the mission, led by a certain Santino Deng, a southerner who had sold himself to the Arabs, against his own brothers. Fr. Barnaba spent the night in the forest. There he found himself in the company of other people, mostly women and children, who were also hiding from the Arabs.

The following morning Fr. Barnaba decided to go to Kwajok to see his mother. The whole group accompanied him. Aweil had become unsafe. It took five days to reach Kwajok, forty-five miles away. Mama Aluel, Fr. Barnaba’s mother, was surprised but happy to see her son, and prepared a good supper for the whole group. After supper the women shared their stories about life in Aweil. “Here in Kwajok the situation is calm, thanks be to God”, said Aluel. “Remain here”, she said to her son. “For a priest there is a lot to do also in Kwajok”. The following day Fr. Barnaba decided to go to Wau. “I need a radio”, he said. “I cannot live without knowing what is happening around here”, he insisted. So he embraced his mother and took the Kayango road, thinking it safer. From Kayango he would proceed to Wau.

On Saturday, August 21, he was a few miles from Wau and spent the night with some people whom he knew. In the morning he sent a boy to inform Bishop Ireneo. The Bishop came at once and brought him to the mission.  The Father was very tired. On Sunday he celebrated the Mass by himself and took a little rest. On Monday, August 23, the Bishop told him that it would be better for him to go to Khartoum, possibly the following Sunday, because Wau was not safe for him. On the afternoon of the same day, at around 3.30 pm, using the pick-up of Fr. Angelo Umedo, Fr. Barnaba went to see the friends who had given him hospitality the previous days. He reached the place, parked the car at the side of the road and went to see his friends.

At around 4.30 pm he was saying goodbye to his friends when some lorries arrived from Aweil carrying soldiers. Santino Deng, the very one who had been looking for him in Aweil, was with them in the last lorry of the convoy. The lorry stopped. Santino asked the Father to identify himself. “I am Fr. Barnaba Deng”, was the reply. “We have been looking for you in Aweil”, answered Santino. At that very moment one of the soldiers shot the Father in the head and then again in the chest. The Father fell and died on the spot. The soldiers hid his body in the grass and left. Later they brought some prisoners who buried the Father “somewhere in the bush”.

Next morning Fr. Angelo Umedo with another priest came by to find out what had occurred. They saw the pick-up and wanted to stop, but people waved to them to go away because there were soldiers hidden in the grass. Then Bishop Ireneo himself went to the police for information. The Officer told him that he would find out and would inform him by phone. The Bishop returned to the mission but found the mission surrounded by police and soldiers. Inside the mission itself policemen and soldiers were everywhere, searching all the rooms. They did not find any proof incriminating him of rebel activities against the government, so the head of police called the Bishop to tell him that Fr. Barnaba had been killed “for not respecting the curfew”. 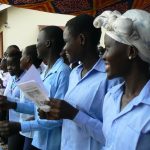 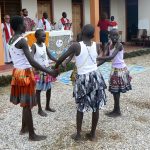 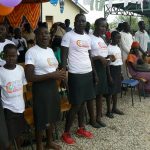 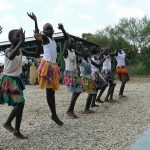