SOUTH SUDAN: A VOICE OF PEACE COMING FROM THE GRASSROOTS

Fr. Jacob Solomon is a Comboni Missionary who has been working in a large mission territory in South Sudan. St. Joseph the Worker Parish, which has been entrusted to the pastoral care of the Comboni Missionaries, falls under the Diocese of Malakal and comprises Leer, Koch, Mayendit and Panyijiar counties.

Just before last Christmas, Fr. Solomon and his youth team have designed and carried out a three-days pastoral youth peace campaign to raise awareness among the communities about issues of justice and peace and to get people more actively involved with the promotion of peace at the grassroots.

This activity was developed in the form of a peace marching, dramas, prayers and speeches that involved thousands of youth and community leaders. They visited many communities and used their skills, talents and marching to deliver a positive message of peace, forgiveness, reconciliation and unity. 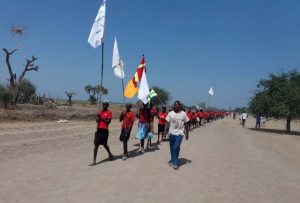 In an interview, Fr. Solomon gives more details of how this peace programme was developed.

Fr. Jacob Solomon, why this peace campaign and what were your expectations?

Fr. J. Solomon: Since the beginning of this war, back in December 2013, communities have been divided and people wounded and traumatized. Thousands of innocent people have died. This campaign was designed to promote justice and peace in our communities and in South Sudan as a whole. It was thought also to be a means to heal the wounds of trauma that are caused by the loss of loved ones, sexual abuse, physical torture, revenge killing and destruction of properties along these four years of civil war in the country.

This peace campaign was very dynamic and followed an itinerary. It began in Nyal, the largest community of our mission. Then, it moved out and passed through many other communities before reaching Ganyiel, the final stop, where we concluded with a big and well participated celebration. We have acted locally and at the grassroots, but our message of peace has gone across the borders of our communities to reach other parts of South Sudan. We expected to get the message of peace across and people, especially the youth, more actively involved in peace building.

The theme of this campaign was “promoting justice and peace in South Sudan”. We had some supplementary themes like stop revenge, love your enemy, we need peace, we need reconciliation and forgiveness, give chance for peace and we need unity. All this added weight to the main theme. We carried flags all along that represented our diversity in South Sudan. This diversity is the richness we have and want to use to build bridges of love among us, to reconcile and forgive each other, to build peaceful communities and live in peace and unity. In this perspective, the youth presented the themes of this campaign in the forms of dramas, skits and songs which were performed along the marching. 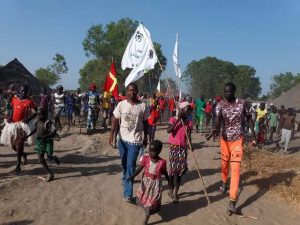 How did this peace campaign unfold and how did people participate in it?

Fr. J. Solomon: Our peace campaign began in Nyal, on the 14th of December 2017, where we gathered youth from six main centres or communities. From there we set out passing through another seven centres, always delivering the same message, until we reached Ganyiel, where we ended the programme on 17th December. As approached the communities, people came out to welcome us and to hear the message of our campaign. As we left the communities, more youth joined our peace marching. So, the number of peace marchers was increasing.

On the very first day we visited three communities and camped in Maluk, the fourth community. On the second day we left Maluk early morning and proceed to Panyijiar. As we moved on, the number of youth increased. The boreholes along the way were used as meeting point so that peace marchers could quench their thirst and were briefed on what was to be delivered at the next community. On day two we arrived in Panyijiar where we had a late lunch and soon after proceed to Ganyiel via Laidit community.

The peace campaign moved on accordingly and the number of youth kept on increasing. We passed through Liadit at around five o’clock. Then, we came across some swamps, as we approached the local market, and marched into Ganyiel singing songs of peace, love, justice, unity and calling for reconciliation and forgiveness. Hundreds of people came out to welcome us and joined our peaceful activity. We did a bit of marching around the local market and nearby communities just before the night fell. 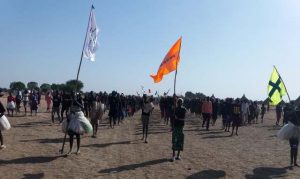 How about logistics and did you have any particular moment of prayer?

Fr. J. Solomon: There were over 4,000 youth in Ganyiel. They came from thirteen communities across Panyijiar County. Because the number of youth was so big, the compound of the church in Ganyiel was not big enough to accommodate them all. They were divided into three groups. Some youth were accommodated also in the premises of NGOs and schools where they spent the night. As they got ready to rest, the organising team met to look into the programme of the following day.

Our voices were united to let the communities know that we are tired of war and that we need justice, peace, unity, reconciliation, forgiveness among us and among all South Sudanese communities. Our campaign is not only for our communities in Panyijiar, but also to give a message to other communities. It is possible to be united, to love each other, to live together, to forgive each other, be reconciled and to build peaceful communities. Flags were raised up in the sky with the message of our campaign “promote justice and peace in South Sudan”. Other colourful flags were also up saying “united we live and divided we die”.

On the 17th December we began our peace campaign with the celebration of the Eucharist, asking Jesus Christ to be with us as we continued campaigning for justice, peace, unity, love, reconciliation and forgiveness in our communities and in South Sudan at large. After the Holy Eucharist, the communities gathered in another suitable place to hear the message of the campaign in the form of drama and songs: ‘we need forgiveness and reconciliation, we need peace and we need unity’. 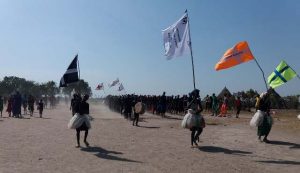 What are the outcomes of this peace initiative? Do you have any intention to continue?

Fr. J. Solomon: In all, this peace event was attended by over six thousand people. The Church can do and is actually doing a lot to promote peace and reconciliation at the grassroots and the youth, with their enthusiasm, energy and creativity, are instrumental and play also an active role in the peace making process.

At the conclusion the elders, traditional chiefs and the local authorities were invited to support and encourage the communities to proclaim and live the same message of the campaign. These local leaders were happy about the campaign and asked us to continue organizing similar programmes. We left Ganyiel back to Nyal that same day. We stopped at each community along the way to say good bye and thank the youth for their participation. We exchanged a sign of peace and left the place back to where we began.

We arrived back to Nyal late in the afternoon 19th of December 2017 with the youth from the six nearby centres whom we had began the peace campaign with a week earlier. Many of these youth have borne pain in their bodies and some got blasters on their toes. It was tiring but worth doing. We have received a lot of appreciation and encouragement from the communities to continue with this peace programme.

We are grateful to the youth of our communities for their active and creative participation, to the community leaders and to Christian Aid for their support. We are looking forward to having other similar peace programmes in our mission. Our peace campaign will always have a celebratory character but next time we want to put more emphases on practical actions. 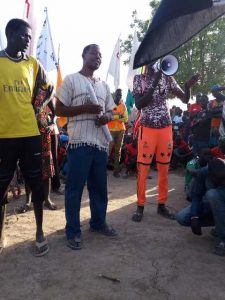 As the youth peace campaign was concluded in South Sudan’s Panyijiar County, representatives of South Sudan’s government and rebel groups were gathered in Addis Ababa, Ethiopia, for a high level revitalisation forum led by the Intergovernmental Authority for Development (IGAD) which commenced on 18th December and concluded with the signing of a cessation of hostilities agreement on 21st December.

The agreement on Cessation of Hostilities (CoH) came into effect on Christmas Eve and provides to stop any attack or hostile military operation starting from the first hour of Sunday 24th December 2017 and to allow humanitarian access to civilians in the conflict areas.

Photos of Fr. Solomon and youth marching for peace in S. Sudan 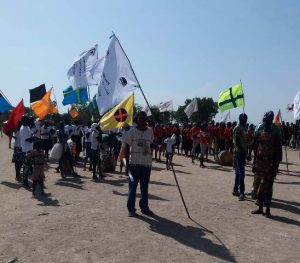 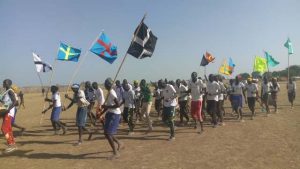 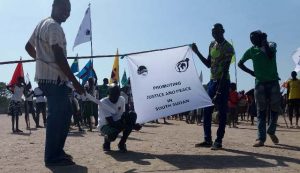