As Christmas approaches, South Sudanese once again find reasons to hope for peace in the country. Christmas is a celebration that marks the birth of Jesus Christ, the ‘Prince of Peace’, in Christianity and a cease-fire is scheduled to go into effect on this very Christmas Eve in South Sudan.

South Sudan’s government and rebel groups signed a cessation of hostilities agreement in Addis Ababa, Ethiopia, on Thursday, 21st December 2017. The agreement on Cessation of Hostilities (CoH) was hammered out by the Intergovernmental Authority for Development (IGAD) after five days of negotiations.

The world’s youngest nation has just entered into its fifth year of civil war. Parties to the Agreement on Resolution of Conflict in the Republic of South Sudan (ARCSS – 17 August 2015) were again brought together to discuss the way forward “in order to achieve the peaceful resolution of all conflicts and the complete silencing of the guns in South Sudan”.

The ‘Agreement on the Cessation of Hostilities, Protection of Civilians and Humanitarian Access’ that was signed this week provides to stop any attack or hostile military operation starting from the first hour of Sunday 24 December 2017 and to allow humanitarian access to civilians in the conflict areas. 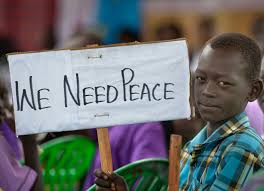 This high level revitalization forum was held in compliance with a decision of the Assembly of Heads of State and Government held last June in Addis Ababa, which decided to convene a forum “to discuss concrete measures, to restore permanent ceasefire, to fully implement the Peace Agreement and to develop a revised and realistic timeline and implementation schedule towards a democratic election at the end of the Transition Period”.

South Sudan’s latest cease-fire deal was welcomed by the International Community and renewed the hopes of South Sudanese to live in peace once again. This Friday Internally Displaced Persons (IDPs) living in camps under the UN protection in Juba have demonstrated peacefully to show support to the cessation of hostilities agreement signed by the warring parties in Addis Ababa late Thursday evening.

The leader of the main rebel group in South Sudan (SPLM-In Opposition), Dr. Riek Machar, has issued an order declaring a cessation of hostilities with the government forces ahead of a ceasefire that will take effect on Sunday.

According to the cease-fire document, “Each Party shall implement this Agreement in full and in good faith, and shall ensure that its affiliates and all forces or armed groups under its command and control at all times observe the Agreement, particularly the provisions on prohibited acts”.