THE ANNIVERSARY OF A ‘LONG LOVE STORY’: 150 YEARS OF COMBONI MISSIONARY PRESENCE IN SOUTH SUDAN

On Saturday 10 June, Fr Francis Chemello, a Comboni Missionary, presented his new book to an audience of more than 100 invited guests. Some were diocesan clergy, religious and lay faithful. There were also about 30 students of Juba Comboni Secondary School.

The presentation of this book was placed within the celebrations of 150th anniversary of foundation of the Comboni Missionaries, an Institute for the African missions founded by St. Daniel Comboni in Verona, Italy, on 1 June 1867. The presentation event took place at the Comboni House in Juba, South Sudan.

It has been a joyful moment of sharing and making memory of the commitment of many missionaries who tirelessly worked for the evangelization of Africa, especially Sudan and South Sudan. 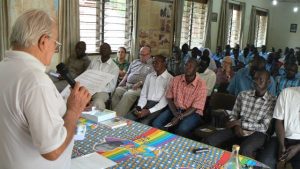 According to Fr. Chemello, the whole content of the book is summarised in the image on its front page, which depicts the foundation of the local church (the hierarchy), the formation of clergy (and lay people) as the first missionary priority, the formation of missionaries as the opening up to the world’s evangelization, and finally, the  150th anniversary of this “long love story”.

The author began his presentation by looking at the event of the 150 years of foundation as ‘the 150th anniversary of a long love story’. “I fact, this is the celebration of 150 years of journey of the Comboni Missionaries together with the people and the Church of Sudan and South Sudan, in the footsteps of Daniel Comboni, now Saint Daniel Comboni”, said Fr. Chemello.

The very purpose for which St. Daniel Comboni founded the Institute for the African missions in Verona was indeed for the ‘Regeneration of Africa through the Africans themselves’, and this plan would have not been fulfilled without the reciprocal sharing along the journey. The work of the Comboni Missionaries went on hand-in-hand with the African people at large, but especially with lay catechists, religious and local clergy.

Fr. Chemello also pointed out that “the Comboni Missionaries carried on with their missionary service working from within the same local church in order to be a sign of the evangelizing mission of the Church itself. Now their call is to be a sign that this same local church is called to be open to the evangelizing mission that goes beyond its boundaries and into the whole world”.

Fr Chemello in front of his audience in Juba, S. Sudan

Why an outline of history? “Because”, said Fr. Chemello, “although I had a licentiate in Missiology, I was not a scholar, I was just a Comboni priest who always worked in the pastoral field and, therefore, more acquainted with this than with an historical research, although I did a lot of research into the files of ‘Archivio Comboniano’ in Rome and into the files of South Sudan Province.”

The author is convinced that this history is a history of people and events: “missionaries and local people” who carry with themselves great ideals, aspirations and holiness, but also their limitations and weakness.

“It is a history of great faithfulness, generosity, enthusiasm, and hard work in evangelization and human promotion, but also of deep wounds which the human weakness has left behind and in need of acceptance, healing, forgiveness and capacity of always carrying on with this relationship in a renewed way”, said Fr. Chemello.

He concluded by saying that “the prophetic sign of the evangelizing mission of the local church is still deeply needed. This is surely the call and role of the Comboni Missionaries everywhere in the world: to be true missionaries, especially here in South Sudan after this long love journey together. This is what this new historical book “The Comboni Missionaries in South Sudan, an Outline of History” is presenting to all of you through its historical account”.