SOUTH SUDAN: A CUP OF TEA

By Bill Firman – The basic things we need for daily living we often simply assume they will be there. Not so in South Sudan where very little can be taken for granted. When I first came to South Sudan in 2009, I lived in Malakal. Most people there cooked on charcoal but we were lucky enough to be able to use gas. It is very convenient to be able just to turn a burner on and off when you like. When gas was no longer available, we used charcoal, a much slower and less convenient way of cooking.

In most of our houses and institutions, charcoal or wood is used for cooking, backed up by gas. Bottled gas is not readily available outside of Juba. We have found ways to maintain a limited supply of gas in Wau, Yambio and Riimenze but only if we use it sparingly. One cannot just go into town to renew the supply. In large towns such as Juba, Wau and Malakal, charcoal has to be brought in from bush areas. It is, or maybe was, a common sight to see trucks laden with bags of charcoal moving into Juba. Making and selling charcoal from wood has been a traditional South Sudan occupation for people in bush areas. 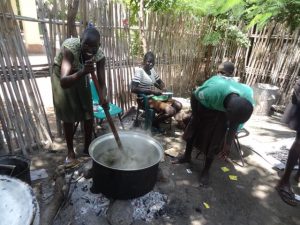 Amid the soaring prices of food, the shortage of diesel and petrol leading to greatly increased public transport costs, the great devaluation of the South Sudanese Pound (SSP) and the general insecurity, we thought conditions for the people could not get much worse. But in the past month, they have. In just three or four weeks the price of a sack of charcoal in Juba has increased from SSP700 per bag to SSP2500. One man living in a UN PoC (Protection of Civilians) camp told me recently that most of the people there have not cooked for several days.

In the PoC camp, the cost of a bag of charcoal is SSP3,500. That is about USD 24. It may not sound much in some countries but when salaries are low, it is a huge problem. The judges in South Sudan have been on strike recently as their salaries are in the range of 8000SSP to 12,000SSP (not even USD100) per month. Most South Sudanese are paid significantly less than this. So how can they afford this inflated price for charcoal?

Our very loyal worker, Emmanuel, has four children at home with his wife plus several members of his extended family. He estimates they normally use about one sack of charcoal per week. Others with fewer people say a sack will last for three or four weeks if they are careful. Either way, it is easy to understand why the huge increase has people worried. 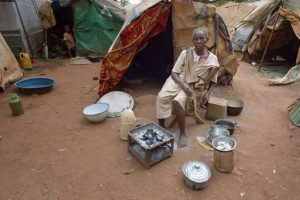 Rosa Taban sits in front of her makeshift shelter in a camp for more than 12,000 internally displaced persons located on the grounds of the Roman Catholic Cathedral of St. Mary in Wau, South Sudan. Image credits: Paul Jeffrey

Why has this happened? Insecurity. Apparently charcoal producers are too easily robbed bringing their charcoal to the city to sell it or when taking the payment for it back to their home place. The rising cost and shortage of fuel may also be a significant factor leading to the high new price. So there is a charcoal shortage. I suppose some may say not burning charcoal is good for the environment but it is certainly an unwanted scenario for those living in Juba who lack alternatives.

The shortage and rising cost of fuel affects everything. Our driver and cook in Juba each have to catch two buses each day, each way, to get from where they live to here. It does not seem long ago that the fare was SSP1 for a bus ride but now it is costing them SSP100 to travel to and from work each day – about SSP2000 per month.

The front cover of a recent Amnesty International Report carried the statement in large bold letters: ‘If men are caught they are killed; if women are caught they are raped’. In another report, Amnesty asserts that ‘A survey conducted in 2015 by UNFPA found that 72% of women living in the Juba PoC sites reported having been raped since the conflict broke out, mostly by police and soldiers.’ 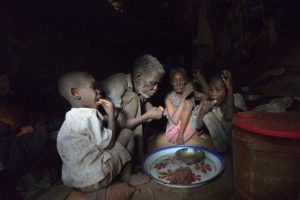 A family shares a meal inside their shelter in a camp for more than 12,000 internally displaced persons located on the grounds of the Roman Catholic Cathedral of St. Mary in Wau, South Sudan. Most of the families here were displaced in June, 2016, when armed conflict engulfed Wau. Image credits: Paul Jeffrey

These are startling statements and there is fear among the people of becoming victims of violence. There are many traumatized people but most cope by putting it out of their minds and getting along cheerfully with life. But how do you remain cheerful when you can’t even afford to boil the water for a cup of tea? How do you remain healthy if you can’t cook your food or sterilize the water you drink? Many South Sudanese are used to living with a simple diet, and with hunger, but many will find life very difficult if they can’t cook their porridge or enjoy a cup of tea.