Fangak is a town that is located along the river Pou (Bahr-el-Zeraf) in Jongley State about 100 Kilometres southwards the city of Malakal.

It is known as Old Fangak because the town was temporarly abandoned in 1977, and the offices of the county were moved to Phom-el-Zeraf, also called New Fangak.
Our presence in Old Fangak was initiated by Fr. Antonio La Braca in 1998. The Comboni community was officially opened only in January 2006 to offer ordinary pastoral care in the areas of Fangak and Ayod inhabited by the Nuer people which is the second largest ethnic group in South Sudan (almost 2 million).
Our mission is to witness Christ and his kingdom of love, reconciliation, justice and peace among people that came to know him and the Church just recently.
Our aims are:

Interpreting the missionary plan of St. Daniel Comboni we make common cause with the local community asking them to be protagonists of their transformation, ourselves being only their collaborators. We count on the good will of the people and their resources, making them also aware of their potencial. But we also accept limitations and what people realistically can do or want to do with their life. We try our best to enter the Nuer pastoralist culture by learning their language, view of life, way of being and how to tackle matters.
We are also collaborating with the programmes of the local governmental primary school and the clinic run by local qualified health-workers who are assited by doctor Jill Seaman, a doctor from Alaska (USA).
At present, we are three Comboni missionaries serving in Old Fangak: 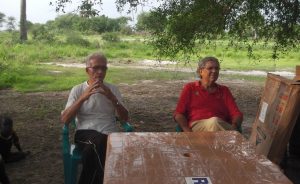