KAJO-KEJI IN SOUTH SUDAN: FROM A PROMISING TOWN AND WELL ESTABLISHED PARISH TO A DEVASTATED SCENARIO

By Komakech James Kenyi – South Sudan’s Kajo-Keji County is located in the southern part of the country bordering with the Ugandan district of Moyo in the newly created Yei River state. It is the home of the Kuku, Ngepo and Liwolo, a group of Nilo-hamites Bari speaking people, and has a population of about one million habitants.

The people living in Kajo-Keji area are mostly farmers and known for living peacefully in their ever green undulating land. The landscape also shows some hills that form a plateau.

Kajo-Keji County had been affected by Sudan’s civil war (1983-2005) that lasted 21 years during the struggles for the independence of the southern region. The local population was forced to move to neighbouring countries and settle there as refugees for many years. As soon as the peace agreement was signed in 2005, many returned home. By 2010 more than half of the population in the diaspora had come back home and resettled into the five Payams of Kajo-Keji.

A record figure of 99% of Kajo-Keji residents voted for the separation of southern Sudan from north Sudan at the 2011 Referendum. The independence of South Sudan held on 9 July 2011 was celebrated with great jubilation. People were encouraged to work hard, go to school and to do business. Schools, health facilities and recreation centres were built with the support of churches and international organisations.

The Catholic missionaries – Comboni Fathers, Brothers and Sisters – played a very important role in the process of evangelising and developing Kajo-Keji, and indeed many others areas of South Sudan. The Comboni missionaries, with the collaboration of the local community and other pastoral agents, run the Sacred Heart Parish of Kajo-Keji since 1986.

The result of their work is visible in nurseries, primaries and secondary schools, health centres, boreholes and the well structured St. Martin Workshop, which was established to train and empower women and men of South Sudan, to develop their skills and teach them a profession. The missionary work that is certainly most visible is the Christian community they helped to build.

Three priests from among these missionaries remain in the memories of the local community:  Fr. Eugenio Magni, Fr. John Ferasin and Fr. Mattia Bizzaro. They passed away due to illness. They, and their companions, worked hard to evangelise the community of Kajo-Keji and to support people in their struggle for a better South Sudan. 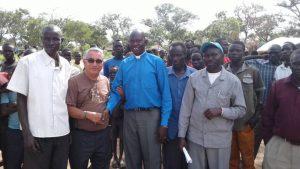 I am from Kajo-Keji and a witness of all remarkable works that the Comboni missionaries with the local church, other churches, NGOs and government have done for and with the people of Kajo-Keji. They managed to set up 16 secondary schools, many primary schools and health facilities. The most important of them is the Comboni Comprehensive College, a nationally recognised church boarding school that welcomes boys and girls from all over the country.

Currently I leave abroad. My family, instead, remains in Kajo-Keji. I was, however, very sad and distressed to hear the reports of what had happened to Kajo-Keji County and its population in the course of this senseless war that persists in South Sudan.

Finally, I had the chance to come home to see my family and visit my birth place. I was happy to meet my beloved ones, but very sad to find Kajo-Keji turned into a ghost town and my home parish occupied by heavily armed soldiers who were also partly responsible for the looting of both public and private properties.

I left my residence in Kenya in May 2017 and set on a holiday journey heading to Uganda to be with my family. I arrived in Moyo district, in the northern region, and it was striking to see my family once again living as refugee in Uganda. Also, the entire pastoral team of my parish was forced to leave Kajo-Keji. The missionaries, faithful to their vocation, left Kajo-Keji to reside in Uganda, which hosts hundreds of thousands of refugees from different parts of South Sudan, to remain close to the people they evangelise.

While staying with my family I got the chance to visit Kajo-Keji and was eager to see how it looked like after fighting took place in the area the population fled. I joined a pastoral team that took the risk to enter South Sudan passing through a border that is guarded by heavily armed soldiers. A good amount of money was asked to let us through. Part of this team runs St. Martin Workshop in Kajo-Keji and the aim of their trip was to collect the few remaining machineries and other items following the looting of the church facilities.

From Jale border up to the army’s main barrack it was all quiet, the silence of a true ghost town. We came across some soldiers in SPLA-marked uniforms. They appeared to be carrying looted items to their controlled areas. We spotted a lonely old man who said he had given up hiding and decided to stay next to the road without fear of any of the two armed forces engaged in fighting in that area. 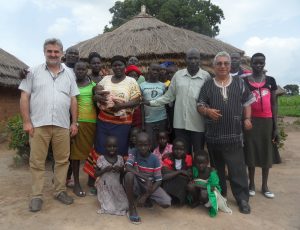 A family in Kajo-Keji before the war

A looted and desolated scenario

We reached the town and centre of the Catholic mission. All houses, shops, dispensaries, schools, churches and other buildings along the road and in town had been looted, including the Comboni Comprehensive College, a teaching institution that had been offering quality education to so many young South Sudanese from different parts of the country since 2000.

Also, St. Martin Workshop that was run by the Comboni Brothers to empower South Sudanese and teach them welding, weaving, bakery, carpentry, building and other professions, was looted. The recently inaugurated parish church dedicated to the Sacred Heart of Jesus was not spared. It was broken into and vandalised.

Many of the looted items are taken and sold out in the neighbouring Uganda. Other items and animals, including cows, goats and pigs, are kept by the looters in their barracks.

Fortunately a few machineries at St. Martin Workshop were not looted. While we were loading them onto a lorry, some soldiers accompanied with some women and children came and surrounded us holding their guns. They did not bother about our presence at all and went on looting. 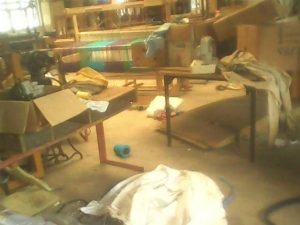 For these soldiers to loot properties in a ghost town seemed to be perhaps the right thing to do. For us, however, it was very sad and frustrating to witness this action just in front of our eyes, which made one of the Brothers to painfully shed tears. The hard work of many years to establish St. Martin Workshop for the benefit of Kajo-Keji population has now been dismantled and brought to zero by a handful of greedy people.

The scenario in the parish church was also desolating. We found the chalice, a few hosts and the lectionary left on the floor. The images of Jesus Christ, St. Daniel Comboni and St. Josephine Bakhita were still hanging on the walls… I just knelt down towards the tabernacle and made this prayer: “Lord Jesus, St. Comboni and St. Bakhita, why all this? Please, grant us peace in South Sudan and change the hearts and minds of these uncouth soldiers and of our selfish leaders. Help us to make of South Sudan the country of our dreams”.

I picked the Bible, the chalice, the hosts and some wine, among other things, and left the church for the residence of the missionaries. The house of the Fathers, Brothers and Sisters, were not spared either. I found them with the doors broken and removed. The same sort of scene I saw in the church schools: computers, invertors, batteries and solar panels all taken away and books taken out of the library and scattered around the compound to be rained on. 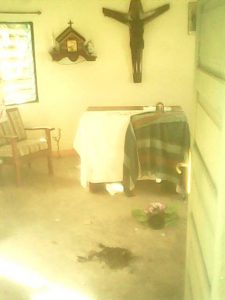 A looted and vandalised church in Kajo-Keji

Mission continues despite the challenges…

The church has always been with the people of Kajo-Keji both during the civil war and in the process of building the new nation and now again during this crisis. Back across the border into Uganda, I have seen that the two Comboni communities of Kajo-Keji have improvised a facility in Moyo district. They work in close collaboration with the local parish priest under Arua Diocese to assist the refugee communities. They obviously face many challenges.

The refugee communities are made up of people from different ethnic groups and so speak different languages. In the camps there are not enough adequate facilities. People hold meetings under the trees, including prayers and teaching. They also face long distances and poor accessibility to the camps. 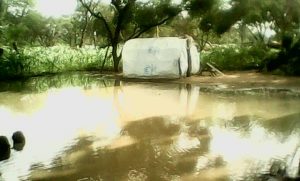 Humanitarian agencies operating in the area have done a lot for the refugees. Each refugee family has been given a piece of land of 600 square meters to cultivate. This is good but not enough. They still face other challenges. There is no clean water in some locations and medical care is inadequate. Due to the heavy rains some areas of the refugee camps have been flooded. Many families lost a lot of the little they were able to carry while fleeing their homes. Agencies were not always able to give a rapid response and relocate the affected families.

Also, the level of stress, trauma and frustration is very high among the refugee families. This contributes to a lot of psychosocial problems. It has been noticed that many South Sudanese refugees, especially youth, are going into drinking and perhaps taking some harmful drugs. Domestic violence is also a sad reality. A man has been reported slaughtering his wife due to a simple misunderstanding while other people have died of heart attacks probably due to the high level of stress and the hard situation they live in.

This has been a very unique and challenging experience to me. It has made me to ask myself, as a young South Sudanese, many questions which I have not yet found the answers. 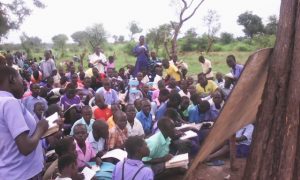 Teaching under a tree in a refugee camp, Uganda

Questions related to the formation and behaviour of South Sudanese youth and their roles in the different ethnic communities. Questions about ethics and good governance or what would be the true objectives and vision of a prosperous nation from our leaders’ perspective.

Questions about a disciplined SPLA. And questions about how to have access to true justice while struggling to achieve peace in South Sudan.