A Eucharistic celebration marked the begging of the 18th edition of the Comboni Year of Ongoing Formation in Rome this Thursday 21 September. The ‘Comboni Year’ is a renewal course for missionaries that have done over ten years of missionary service.

The Comboni Year “is a time of renewal, a unique opportunity for these missionaries to have some time to rest and to favour a profound encounter with themselves, with God, with St. Daniel Comboni and with one another. The expectation is that they will get both physically and spiritually renewed and ready to return to their missions for a better evangelising service”, says Fr. Siro Stocchetti, one of the coordinators of the course.

Many of these missionaries have been working in very difficult situations such as war and conflict zones, in extremely poor and often violent communities, with prisoners and in far-off and isolated communities. They often feel wearied and the need to rest and get refreshed.

The opening mass for the ‘Comboni Year’ of ongoing formation was presided by Fr. Tesfaye Tadesse Gebresilasie, the General Superior of the Comboni missionaries, and took place in the main chapel of the General House in Rome on the feast of St. Matthew Apostle.

Fr. Tesfaye thanked each missionary for the service they have rendered to the people of God and to the Institute during their first missionary experience and encouraged them to take this time of rest and renewal as a moment of grace and ongoing formation before they continue their missionary work.

The renewal period of the 18th edition of the Comboni Year 2017/2018 will last for seven months beginning this September. 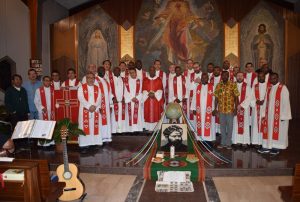